I’m not sure what I just watched. Once again, I was taken aback by and actual FIRST movie being listed on Hulu (as opposed to seeing “Puppet Master VXII, The Cult of the Sock Puppet” or something) so I dove at the opportunity. 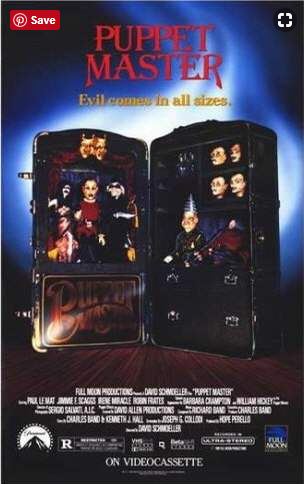 This film put the “whack” in wacky. It’s like if Doctor Phibes and Jack the Giant Killer had a slow-paced poorly written hate baby. We have minimal characters without a lot of motivation, five psychics who are trying to uncover the mysteries of the Puppet Master’s puppets (which we know hardly anything about, getting no background on who the Puppet Master was, why he did what he did, and what his motivation for it was). So looking for puppets, find dead friend. They stay the night, and the rest of the movie is them getting picked off in HILLLLLAAAAAARIOUS fashions by weird little “celebrity death match” puppets.

“We’re just as God made us, Ma’am.” (image property of Universal Studios)

We get a monologue at the end by the big bad but yeah… not much else going on.

I think this is probably best enjoyed with a lot of friends and a lot of beer. I mentioned Doctor Phibes, and that’s really the attraction of the movie, to see how each puppet utilizes their special “skill” for mayhem. It’s delightfully cartoonish. Just be prepared to wonder, “Wait, who was that guy? Why is he/she here/doing that/want that?” a lot. I’d love to watch this again with some smart-ass loudmouths like me.

The Puppet Master is currently streaming on Hulu.