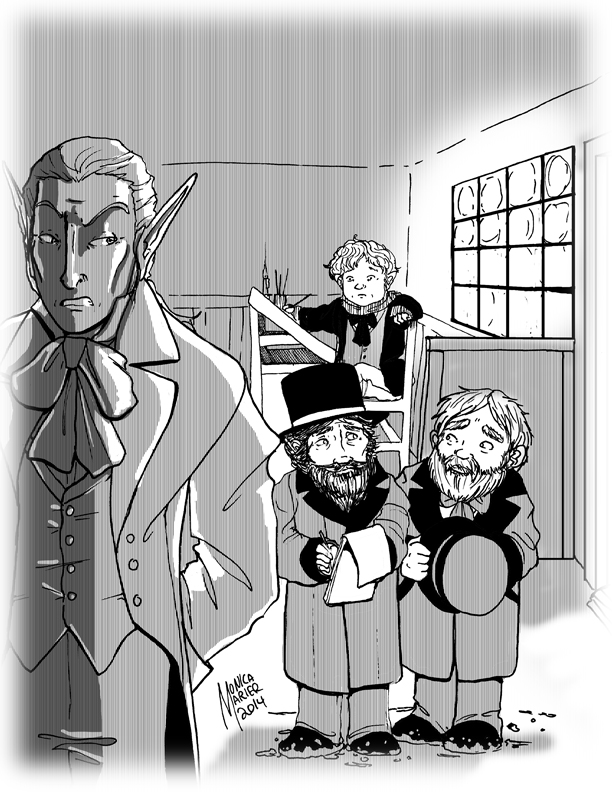 ‘If they would rather die…they had better do it, and decrease the surplus population.’

This lunatic, in letting Scrooge’s nephew out, had let two other people in. They were portly gentlemen, pleasant to behold, and now stood, with their hats off, in Scrooge’s office. They had books and papers in their hands, and bowed to him.

`Scrooge and Marley’s, I believe,’ said one of the gentlemen, referring to his list. `Have I the pleasure of addressing Mr. Scrooge, or Mr. Marley?’

`Mr. Marley has been dead these seven years,’ Scrooge replied. `He died seven years ago, this very night.’

`We have no doubt his liberality is well represented by his surviving partner,’ said the gentleman, presenting his credentials.

It certainly was; for they had been two kindred spirits. At the ominous word `liberality,’ Scrooge frowned, and shook his head, and handed the credentials back.

`Are there no prisons?’ asked Scrooge.

`Plenty of prisons,’ said the gentleman, laying down the pen again.

`And the Union workhouses?’ demanded Scrooge. `Are they still in operation?’

`They are. Still,’ returned the gentleman, `I wish I could say they were not.’

`The Treadmill and the Poor Law are in full vigour, then?’ said Scrooge.

`Oh! I was afraid, from what you said at first, that something had occurred to stop them in their useful course,’ said Scrooge. `I’m very glad to hear it.’

`Under the impression that they scarcely furnish Christian cheer of mind or body to the multitude,’ returned the gentleman, `a few of us are endeavouring to raise a fund to buy the Poor some meat and drink. and means of warmth. We choose this time, because it is a time, of all others, when Want is keenly felt, and Abundance rejoices. What shall I put you down for?’

`You wish to be anonymous?’

`I wish to be left alone,’ said Scrooge. `Since you ask me what I wish, gentlemen, that is my answer. I don’t make merry myself at Christmas and I can’t afford to make idle people merry. I help to support the establishments I have mentioned — they cost enough; and those who are badly off must go there.’

`Many can’t go there; and many would rather die.’

`If they would rather die,’ said Scrooge, `they had better do it, and decrease the surplus population. Besides — excuse me — I don’t know that.’

`It’s not my business,’ Scrooge returned. `It’s enough for a man to understand his own business, and not to interfere with other people’s. Mine occupies me constantly. Good afternoon, gentlemen!’

Seeing clearly that it would be useless to pursue their point, the gentlemen withdrew. Scrooge returned his labours with an improved opinion of himself, and in a more facetious temper than was usual with him.

Meanwhile the fog and darkness thickened so, that people ran about with flaring links, proffering their services to go before horses in carriages, and conduct them on their way. The ancient tower of a church, whose gruff old bell was always peeping slily down at Scrooge out of a Gothic window in the wall, became invisible, and struck the hours and quarters in the clouds, with tremulous vibrations afterwards as if its teeth were chattering in its frozen head up there. The cold became intense. In the main street at the corner of the court, some labourers were repairing the gas-pipes, and had lighted a great fire in a brazier, round which a party of ragged men and boys were gathered: warming their hands and winking their eyes before the blaze in rapture. The water-plug being left in solitude, its overflowing sullenly congealed, and turned to misanthropic ice. The brightness of the shops where holly sprigs and berries crackled in the lamp heat of the windows, made pale faces ruddy as they passed. Poulterers’ and grocers’ trades became a splendid joke; a glorious pageant, with which it was next to impossible to believe that such dull principles as bargain and sale had anything to do. The Lord Mayor, in the stronghold of the mighty Mansion House, gave orders to his fifty cooks and butlers to keep Christmas as a Lord Mayor’s household should; and even the little tailor, whom he had fined five shillings on the previous Monday for being drunk and bloodthirsty in the streets, stirred up to-morrow’s pudding in his garret, while his lean wife and the baby sallied out to buy the beef.

Foggier yet, and colder! Piercing, searching, biting cold. If the good Saint Dunstan had but nipped the Evil Spirit’s nose with a touch of such weather as that, instead of using his familiar weapons, then indeed he would have roared to lusty purpose. The owner of one scant young nose, gnawed and mumbled by the hungry cold as bones are gnawed by dogs, stooped down at Scrooge’s keyhole to regale him with a Christmas carol: but at the first sound of

`God bless you, merry gentleman!
May nothing you dismay!’

Scrooge seized the ruler with such energy of action, that the singer fled in terror, leaving the keyhole to the fog and even more congenial frost.

Start at the beginnning