So, today I saw the 3rd installment of the Omen franchise, The Omen III, (The Final Conflict) 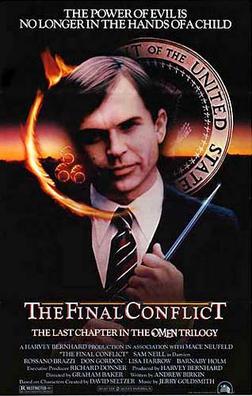 This movie was a rather dissappointing finale to the storyline. There’s just a whole lot of nothing happening in it and it’s chock full of thrilling poorly-lit action sequences.

Seriously, when you compare this to the almost cartoony deaths of Omen II, these deaths are almost like in Disney movies when we have the bad guy fall off a cliff into shadow.

When things do start to happen (at around the Half-hour mark) it gets good. Sam Neil has some great performances and things start moving, we’re introduced to the second Christ, and then…. a baby-killing sequence. Fun. Stuff. I get that it’s supposed to set the tone and be a parallel to the infant genocide of King Herod, but it’s a gruesome sequence and uncomfortably long.

It’s also the 3rd movie where we’ve seen absolutely no conflict of powers between God and Satan. Whenever Satan attacks something holy, it’s a one-sided struggle (and I use the word struggle lightly). It’s the 3rd movie, and we’ve still seen no real conflict, not even an internal one, which they hinted at in the second movie.

When Damien is a little boy, he’s weaker, vulnerable, and there’s a sense of danger and uncertainty. Now that Damein is a big strapping grown-up, it’s pretty boring.

Please, Lord, help to ease Monica’s pain and let her not have to watch this movie again, Thy will be done.

I was hoping for an ultimate showdown at the end, but end came as a quick “bam”, some cheesy lights, and the Mormon Tabernacle choir. UGGH. There was so much more they could have done with this if they’d led with characters and not with events.

Final note on the Franchise: Watch movies one and two, and then read Good Omens by Terry Pratchett and Neil Gaiman.