Real quick today, because I got a date with the Mythgard institute tonight. Today I watched a brilliant horror pick based on a short story by Stephen King: Children of the Corn 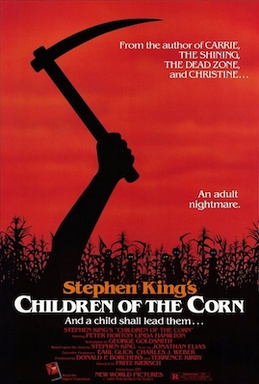 This was a movie I was always consciously aware of when I was a kid. I knew a few kids who had seen it, and more than a few grown-ups had used the phrase “children of the corn” to describe my generation. I only saw this film for the first time last year. Mostly I could never make it past the scene with the deli-slicer at the beginning, but thankfully, that was really the most graphic part of the film. The rest of the movie makes it’s bank on delicious world-building and story-telling of a town of Satan worshiping children led by the charismatic mystery-child Isaac.

(Fun fact: the actor playing Isaac, John Franklin, was 25 at the time. He suffers from growth hormone deficiency, which casting agents felt added to the “otherworldly” feel of Isaac’s character and helped him to sound more “grown-up.”)

The rest is your typical formula of two outsiders stumbling on this towns secrets and trying to get away, but the characterization and the awesome execution make this a goose-pimply ride. Also surprising that this guy is still considered one of the most terrifying of movie villains:

I blame this movie for the current rash of anti-ginger sentiment.