Well one thing this movie does NOT have is anything by Edgar Allen Poe save one poem at the end. This movie is almost 100% H. P. Lovecraft’s “The Case of Charles Dexter Ward.” In interviews,Corman stated that he was very much a Lovecraft fan, but no studio wanted to produce a story a story by this “unheard of schlock writer.” That’s when it was decided to rename this picture, “The Haunted Palace,” and claim it was based on a poem by Edgar Allen Poe, seeding the “castle” angle throughout the movie. After all, Corman had already made several well-received Poe pictures with Vincent Price, so why not?

That being said, this is actually one of the strongest movie’s Corman’s ever directed. The pacing is better than your usual Corman, the story is well presented and visually interesting. Price’s performance is, as always, very entertaining, and the final sequence is satisfying and nicely grim.

This is a jewel of classic B-Movies, and definitely worth a watch.

Day 8 is here, and I’m dipping back into the retro vault for some old-fashioned B-movies like… 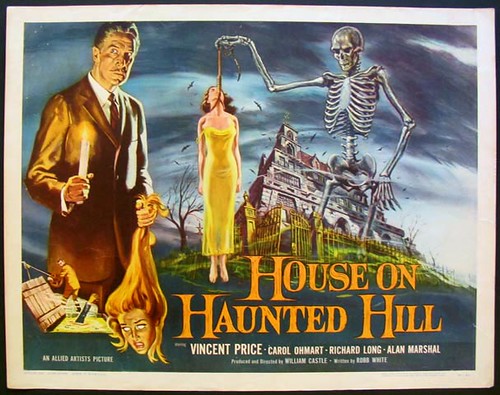 This movie centers around a party at a haunted house where the guests must stay the night to win a big cash prize. It features the crown prince of terror, Vincent Price, and some ladies who are very good at screaming. It lives up to the Castle tradition of containing about 14 minutes of plot in it’s 75 minute run-time. But despite the cheesy special effects and some really LOOONG pauses, it’s great fun to watch, especially if you watch one of the many available commentary tracks for this. My favorite is via RiffTrax. And if you think old films are too sacred to poke fun at, I submit this side-splittingly terrible moment.

And there are actually some very good thrilling scenes in it, like with the phantom rope. Eating fine brie every day is a bore. Some days I just want the guilty pleasure of some creamy salty American Kraft singles in my movies.