It’s high time I covered a baddy, so this week’s post is about Tyrrus Gruthsfield. Now, I don’t like to think of him as a baddy, although he’s definitely a villain in books 1 & 2. I just dislike characters who are evil through and through. I grew up watching cartoonishly evil bad guys in movies and on TV that were evil simply for the sake of being evil, and those always bothered me a bit (I should probably write a post on this later.) The point is, Tyrrus isn’t a villain because he wants to be evil. Like all proper villains, Tyrrus thinks he’s the hero of his own story—in this case a story of loss, love and abandonment.

We first meet Tyrrus when he appears in the last act of Must Love Dragons as the ruthless head of the corrupt Rangers Union. But we also know he and Linus have a history together. Let’s look into that, shall we? 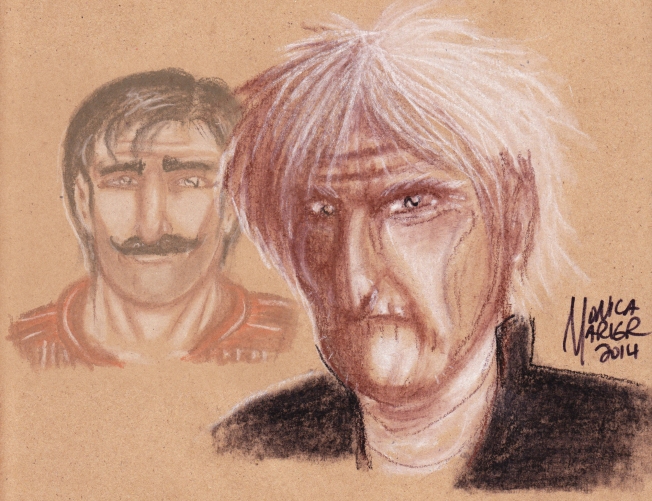 Linus met Tyrrus when upon passing his entrance exams at the Rangers Union to become a Pre-One Ranger, or a Ranger-in-training. This is an apprenticeship period where a Ranger is usually assigned to an E-10 Ranger in good standing to have as mentor. The trainers assigned Linus to Tyrrus Gruthsfield, who was in his late 30’s at the time. Tyrrus was a rugged, jovial dandy bachelor, with a love of adventure and a lust for high living. He and Linus bonded straight away. Linus was in awe of this rugged expert of the wilderness and his bombastic personality. Tyrrus fed off of Linus’ admiration, and his youthful outlook made Tyrrus feel like he himself was a young teen again.

When Linus had finished his year under Gruthsfield as a student and graduated to E-1, he continued to travel and work with Tyrrus as a friend and compatriot. Linus became a family to Tyrrus, who had grown up as an orphan in the Rangers Union’s boys home for foundlings and had never known a family.  And Linus, who had always had to fight with his dozen siblings for attention, enjoyed the singular attention Gruthsfield was giving him and eventually left his father’s house to live at the Union boarding house with Gruthsfield and other young bachelors.

Tyrrus tried to advise Linus as best he could on how best to navigate the rocky path of his late teens into adulthood, but it was myopic and sometimes self-serving. Tyrrus had avoided growing up, and didn’t really want Linus to either. It’s possible that a lot of Linus’ early missteps (bad relationships, hijinks, faux pas, his drinking habits) were either from Tyrrus’ lack of direction or from simply bad advice.

It was about five years after their pairing, when Linus began to make friends and peers in his own age-group, that his relationship with the then 40-something Tyrrus became strained. Tyrrus became more controlling of Linus and his free-time and assignments. He subtly tried to orchestrate fallings out between Linus and his friends, and when that didn’t work, he would bombard Linus with accusations of betrayal and callousness.

Linus didn’t take well to Gruthsfield’s constant intrusion on his life—feeling like he was tied to the apron strings of a clucking, nagging mother hen. By the time when Linus was beginning to slip into depression, alcohol, and a dangerous affair—a time when Gruthsfield genuinely wanted to help Linus—it was too late. Linus had already stopped listening to Grusthfield.

The incident with Tchineline (as outlined in Runs in Goods Condition) was the final breaking point and, soon after, Linus severed ties with his ex-mentor. Tyrrus and Linus most likely had no contact with eachother until the events of Must Love Dragons. Linus was more than aware of Gruthfield’s rise to power in the Union, but was only a disinterested bystander at the time. He had no idea that during that twenty-some years in-between Gruthfield had spent it brooding on the loss of his only friend and family, and becoming harder and more twisted as the realization of his own mortality grew more apparent and tortured him with the passage of time.

*The name Tyrrus is (rather obviously) taken from the Greek tyrannos meaning monarch or King.

*Gruthsfield’s actions have always been chiefly fueled by his fear of aging and death. It’s what draws him closer to true villainy as he begins to enter old age.

*He probably assaulted Linus a few times in their younger days, but played it off later as nothing. That unrequited attraction, as well as his emotional manipulation was a key factor in their falling out and later turned into the hatred we see in the books.

*Tyrrus was the one who blackballed Linus from renewing his Ranger’s E-10 license prior to the events of Must Love Dragons. After failing to ban him entirely, he brought up the motion to make Linus restart as an E-1.

* In my head, his voice sounds like the late Tony Jay.