This was not addressed to Scrooge, or to any one whom he could see, but it produced an immediate effect. For again Scrooge saw himself. He was older now; a man in the prime of life. His face had not the harsh and rigid lines of later years; but it had begun to wear the signs of care and avarice. There was an eager, greedy, restless motion in the eye, which showed the passion that had taken root, and where the shadow of the growing tree would fall.

He was not alone, but sat by the side of a fair young girl in a mourning-dress: in whose eyes there were tears, which sparkled in the light that shone out of the Ghost of Christmas Past.

`It matters little,’ she said, softly. `To you, very little. Another idol has displaced me; and if it can cheer and comfort you in time to come, as I would have tried to do, I have no just cause to grieve.’

`What Idol has displaced you.’ he rejoined.

`This is the even-handed dealing of the world.’ he said. `There is nothing on which it is so hard as poverty; and there is nothing it professes to condemn with such severity as the pursuit of wealth.’

`You fear the world too much,’ she answered, gently. `All your other hopes have merged into the hope of being beyond the chance of its sordid reproach. I have seen your nobler aspirations fall off one by one, until the master-passion, Gain, engrosses you. Have I not.’

`What then.’ he retorted. `Even if I have grown so much wiser, what then. I am not changed towards you.’

She shook her head.

`Our contract is an old one. It was made when we were both poor and content to be so, until, in good season, we could improve our worldly fortune by our patient industry. You are changed. When it was made, you were another man.’

`I was a boy,’ he said impatiently. 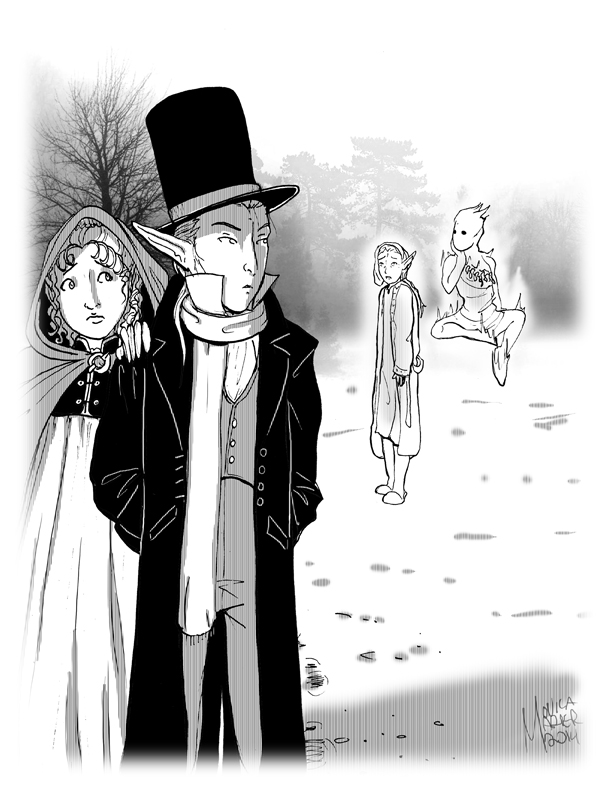 `Even if I have grown so much wiser, what then. I am not changed towards you.’

`Your own feeling tells you that you were not what you are,’ she returned. `I am. That which promised happiness when we were one in heart, is fraught with misery now that we are two. How often and how keenly I have thought of this, I will not say. It is enough that I have thought of it, and can release you.’

`Have I ever sought release.’

`In a changed nature; in an altered spirit; in another atmosphere of life; another Hope as its great end. In everything that made my love of any worth or value in your sight. If this had never been between us,’ said the girl, looking mildly, but with steadiness, upon him;’ tell me, would you seek me out and try to win me now. Ah, no.’

He seemed to yield to the justice of this supposition, in spite of himself. But he said with a struggle,’ You think not.’

`I would gladly think otherwise if I could,’ she answered, `Heaven knows. When I have learned a Truth like this, I know how strong and irresistible it must be. But if you were free to-day, to-morrow, yesterday, can even I believe that you would choose a dowerless girl — you who, in your very confidence with her, weigh everything by Gain: or, choosing her, if for a moment you were false enough to your one guiding principle to do so, do I not know that your repentance and regret would surely follow. I do; and I release you. With a full heart, for the love of him you once were.’

He was about to speak; but with her head turned from him, she resumed.

`You may — the memory of what is past half makes me hope you will — have pain in this. A very, very brief time, and you will dismiss the recollection of it, gladly, as an unprofitable dream, from which it happened well that you awoke. May you be happy in the life you have chosen.’

She left him, and they parted.

`Spirit.’ said Scrooge,’ show me no more. Conduct me home. Why do you delight to torture me.’

`One shadow more.’ exclaimed the Ghost.

But the relentless Ghost pinioned him in both his arms, and forced him to observe what happened next.

They were in another scene and place; a room, not very large or handsome, but full of comfort. Near to the winter fire sat a beautiful young girl, so like that last that Scrooge believed it was the same, until he saw her, now a comely matron, sitting opposite her daughter. The noise in this room was perfectly tumultuous, for there were more children there, than Scrooge in his agitated state of mind could count; and, unlike the celebrated herd in the poem, they were not forty children conducting themselves like one, but every child was conducting itself like forty. The consequences were uproarious beyond belief; but no one seemed to care; on the contrary, the mother and daughter laughed heartily, and enjoyed it very much; and the latter, soon beginning to mingle in the sports, got pillaged by the young brigands most ruthlessly. What would I not have given to one of them. Though I never could have been so rude, no, no. I wouldn’t for the wealth of all the world have crushed that braided hair, and torn it down; and for the precious little shoe, I wouldn’t have plucked it off, God bless my soul. to save my life. As to measuring her waist in sport, as they did, bold young brood, I couldn’t have done it; I should have expected my arm to have grown round it for a punishment, and never come straight again. And yet I should have dearly liked, I own, to have touched her lips; to have questioned her, that she might have opened them; to have looked upon the lashes of her downcast eyes, and never raised a blush; to have let loose waves of hair, an inch of which would be a keepsake beyond price: in short, I should have liked, I do confess, to have had the lightest licence of a child, and yet to have been man enough to know its value.

But now a knocking at the door was heard, and such a rush immediately ensued that she with laughing face and plundered dress was borne towards it the centre of a flushed and boisterous group, just in time to greet the father, who came home attended by a man laden with Christmas toys and presents. Then the shouting and the struggling, and the onslaught that was made on the defenceless porter. The scaling him with chairs for ladders to dive into his pockets, despoil him of brown-paper parcels, hold on tight by his cravat, hug him round his neck, pommel his back, and kick his legs in irrepressible affection. The shouts of wonder and delight with which the development of every package was received. The terrible announcement that the baby had been taken in the act of putting a doll’s frying-pan into his mouth, and was more than suspected of having swallowed a fictitious turkey, glued on a wooden platter. The immense relief of finding this a false alarm. The joy, and gratitude, and ecstasy. They are all indescribable alike. It is enough that by degrees the children and their emotions got out of the parlour, and by one stair at a time, up to the top of the house; where they went to bed, and so subsided.

And now Scrooge looked on more attentively than ever, when the master of the house, having his daughter leaning fondly on him, sat down with her and her mother at his own fireside; and when he thought that such another creature, quite as graceful and as full of promise, might have called him father, and been a spring-time in the haggard winter of his life, his sight grew very dim indeed.

`Belle,’ said the husband, turning to his wife with a smile,’ I saw an old friend of yours this afternoon.’

`How can I. Tut, don’t I know.’ she added in the same breath, laughing as he laughed. `Mr Scrooge.’

`Mr Scrooge it was. I passed his office window; and as it was not shut up, and he had a candle inside, I could scarcely help seeing him. His partner lies upon the point of death, I hear; and there he sat alone. Quite alone in the world, I do believe.’

`Spirit.’ said Scrooge in a broken voice,’ remove me from this place.’

`I told you these were shadows of the things that have been,’ said the Ghost. `That they are what they are, do not blame me.’

`Remove me.’ Scrooge exclaimed,’ I cannot bear it.’

He turned upon the Ghost, and seeing that it looked upon him with a face, in which in some strange way there were fragments of all the faces it had shown him, wrestled with it.

`Leave me. Take me back. Haunt me no longer.’

In the struggle, if that can be called a struggle in which the Ghost with no visible resistance on its own part was undisturbed by any effort of its adversary, Scrooge observed that its light was burning high and bright; and dimly connecting that with its influence over him, he seized the extinguisher-cap, and by a sudden action pressed it down upon its head.

The Spirit dropped beneath it, so that the extinguisher covered its whole form; but though Scrooge pressed it down with all his force, he could not hide the light, which streamed from under it, in an unbroken flood upon the ground.

He was conscious of being exhausted, and overcome by an irresistible drowsiness; and, further, of being in his own bedroom. He gave the cap a parting squeeze, in which his hand relaxed; and had barely time to reel to bed, before he sank into a heavy sleep.