Awaking in the middle of a prodigiously tough snore, and sitting up in bed to get his thoughts together, Scrooge had no occasion to be told that the bell was again upon the stroke of One. He felt that he was restored to consciousness in the right nick of time, for the especial purpose of holding a conference with the second messenger despatched to him through Jacob Marley’s intervention. But, finding that he turned uncomfortably cold when he began to wonder which of his curtains this new spectre would draw back, he put them every one aside with his own hands, and lying down again, established a sharp look-out all round the bed. For, he wished to challenge the Spirit on the moment of its appearance, and did not wish to be taken by surprise, and made nervous.

Gentlemen of the free-and-easy sort, who plume themselves on being acquainted with a move or two, and being usually equal to the time-of-day, express the wide range of their capacity for adventure by observing that they are good for anything from pitch-and-toss to manslaughter; between which opposite extremes, no doubt, there lies a tolerably wide and comprehensive range of subjects. Without venturing for Scrooge quite as hardily as this, I don’t mind calling on you to believe that he was ready for a good broad field of strange appearances, and that nothing between a baby and rhinoceros would have astonished him very much.

Now, being prepared for almost anything, he was not by any means prepared for nothing; and, consequently, when the Bell struck One, and no shape appeared, he was taken with a violent fit of trembling. Five minutes, ten minutes, a quarter of an hour went by, yet nothing came. All this time, he lay upon his bed, the very core and centre of a blaze of ruddy light, which streamed upon it when the clock proclaimed the hour; and which, being only light, was more alarming than a dozen ghosts, as he was powerless to make out what it meant, or would be at; and was sometimes apprehensive that he might be at that very moment an interesting case of spontaneous combustion, without having the consolation of knowing it. At last, however, he began to think — as you or I would have thought at first; for it is always the person not in the predicament who knows what ought to have been done in it, and would unquestionably have done it too — at last, I say, he began to think that the source and secret of this ghostly light might be in the adjoining room, from whence, on further tracing it, it seemed to shine. This idea taking full possession of his mind, he got up softly and shuffled in his slippers to the door.

The moment Scrooge’s hand was on the lock, a strange voice called him by his name, and bade him enter. He obeyed.

It was his own room. There was no doubt about that. But it had undergone a surprising transformation. The walls and ceiling were so hung with living green, that it looked a perfect grove; from every part of which, bright gleaming berries glistened. The crisp leaves of holly, mistletoe, and ivy reflected back the light, as if so many little mirrors had been scattered there; and such a mighty blaze went roaring up the chimney, as that dull petrification of a hearth had never known in Scrooge’s time, or Marley’s, or for many and many a winter season gone. Heaped up on the floor, to form a kind of throne, were turkeys, geese, game, poultry, brawn, great joints of meat, sucking-pigs, long wreaths of sausages, mince-pies, plum-puddings, barrels of oysters, red-hot chestnuts, cherry-cheeked apples, juicy oranges, luscious pears, immense twelfth-cakes, and seething bowls of punch, that made the chamber dim with their delicious steam. In easy state upon this couch, there sat a jolly Giant, glorious to see, who bore a glowing torch, in shape not unlike Plenty’s horn, and held it up, high up, to shed its light on Scrooge, as he came peeping round the door.

`Come in.’ exclaimed the Ghost. `Come in, and know me better, man.’

Scrooge entered timidly, and hung his head before this Spirit. He was not the dogged Scrooge he had been; and though the Spirit’s eyes were clear and kind, he did not like to meet them.

`I am the Ghost of Christmas Present,’ said the Spirit. `Look upon me.’ 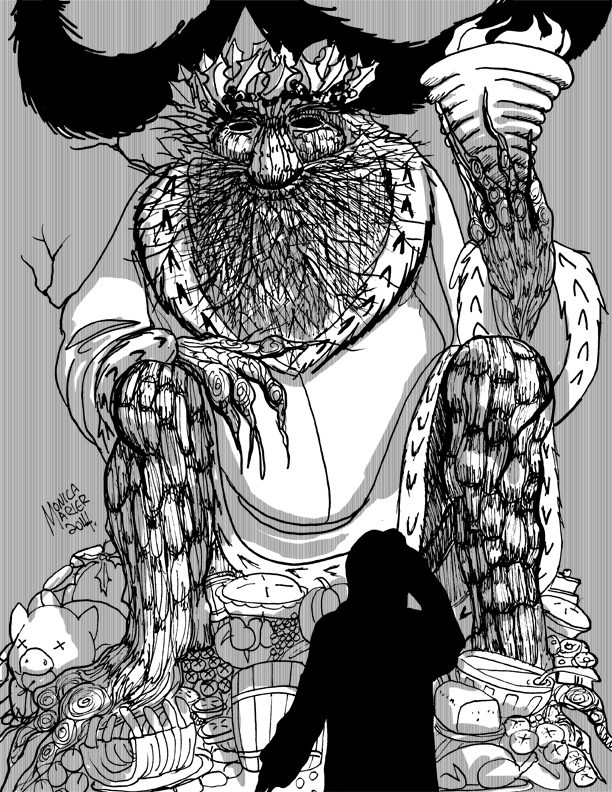 “Come in and know me better, man!”

Scrooge reverently did so. It was clothed in one simple green robe, or mantle, bordered with white fur. This garment hung so loosely on the figure, that its capacious breast was bare, as if disdaining to be warded or concealed by any artifice. Its feet, observable beneath the ample folds of the garment, were also bare; and on its head it wore no other covering than a holly wreath, set here and there with shining icicles. Its dark brown curls were long and free; free as its genial face, its sparkling eye, its open hand, its cheery voice, its unconstrained demeanour, and its joyful air. Girded round its middle was an antique scabbard; but no sword was in it, and the ancient sheath was eaten up with rust.

`You have never seen the like of me before.’ exclaimed the Spirit.

`Never,’ Scrooge made answer to it.

`Have never walked forth with the younger members of my family; meaning (for I am very young) my elder brothers born in these later years.’ pursued the Phantom.

`I don’t think I have,’ said Scrooge. `I am afraid I have not. Have you had many brothers, Spirit.’

`A tremendous family to provide for.’ muttered Scrooge.

The Ghost of Christmas Present rose.

`Spirit,’ said Scrooge submissively,’ conduct me where you will. I went forth last night on compulsion, and I learnt a lesson which is working now. To-night, if you have aught to teach me, let me profit by it.’

Scrooge did as he was told, and held it fast.