Stave Four: The Last of the Spirits
The Phantom slowly, gravely, silently approached. When it came, Scrooge bent down upon his knee; for in the very air through which this Spirit moved it seemed to scatter gloom and mystery.

It was shrouded in a deep black garment, which concealed its head, its face, its form, and left nothing of it visible save one outstretched hand. But for this it would have been difficult to detach its figure from the night, and separate it from the darkness by which it was surrounded.

He felt that it was tall and stately when it came beside him, and that its mysterious presence filled him with a solemn dread. He knew no more, for the Spirit neither spoke nor moved.

`I am in the presence of the Ghost of Christmas Yet To Come.’ said Scrooge.

The Spirit answered not, but pointed onward with its hand.

`You are about to show me shadows of the things that have not happened, but will happen in the time before us,’ Scrooge pursued. `Is that so, Spirit.’

The upper portion of the garment was contracted for an instant in its folds, as if the Spirit had inclined its head. That was the only answer he received.

Although well used to ghostly company by this time, Scrooge feared the silent shape so much that his legs trembled beneath him, and he found that he could hardly stand when he prepared to follow it. The Spirit pauses a moment, as observing his condition, and giving him time to recover.

But Scrooge was all the worse for this. It thrilled him with a vague uncertain horror, to know that behind the dusky shroud, there were ghostly eyes intently fixed upon him, while he, though he stretched his own to the utmost, could see nothing but a spectral hand and one great heap of black. 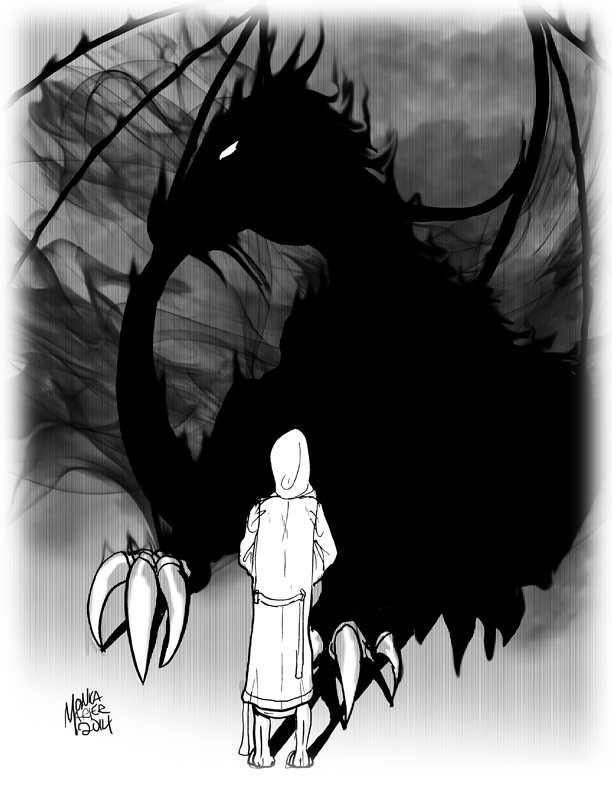 `I am in the presence of the Ghost of Christmas Yet To Come.’ said Scrooge. The Spirit answered not, but pointed onward with its hand.

`Ghost of the Future.’ he exclaimed,’ I fear you more than any spectre I have seen. But as I know your purpose is to do me good, and as I hope to live to be another man from what I was, I am prepared to bear you company, and do it with a thankful heart. Will you not speak to me.’

It gave him no reply. The hand was pointed straight before them.

`Lead on.’ said Scrooge. `Lead on. The night is waning fast, and it is precious time to me, I know. Lead on, Spirit.’

The Phantom moved away as it had come towards him. Scrooge followed in the shadow of its dress, which bore him up, he thought, and carried him along.

They scarcely seemed to enter the city; for the city rather seemed to spring up about them, and encompass them of its own act. But there they were, in the heart of it; on Change, amongst the merchants; who hurried up and down, and chinked the money in their pockets, and conversed in groups, and looked at their watches, and trifled thoughtfully with their great gold seals; and so forth, as Scrooge had seen them often.

The Spirit stopped beside one little knot of business men. Observing that the hand was pointed to them, Scrooge advanced to listen to their talk.

`No,’ said a great fat man with a monstrous chin,’ I don’t know much about it, either way. I only know he’s dead.’

`When did he die.’ inquired another.

`Why, what was the matter with him.’ asked a third, taking a vast quantity of snuff out of a very large snuff-box. `I thought he’d never die.’

`God knows,’ said the first, with a yawn.

`What has he done with his money.’ asked a red-faced gentleman with a pendulous excrescence on the end of his nose, that shook like the gills of a turkey-cock.

`I haven’t heard,’ said the man with the large chin, yawning again. `Left it to his company, perhaps. He hasn’t left it to me. That’s all I know.’

This pleasantry was received with a general laugh.

`It’s likely to be a very cheap funeral,’ said the same speaker;’ for upon my life I don’t know of anybody to go to it. Suppose we make up a party and volunteer.’

`I don’t mind going if a lunch is provided,’ observed the gentleman with the excrescence on his nose. `But I must be fed, if I make one.’

`Well, I am the most disinterested among you, after all,’ said the first speaker,’ for I never wear black gloves, and I never eat lunch. But I’ll offer to go, if anybody else will. When I come to think of it, I’m not at all sure that I wasn’t his most particular friend; for we used to stop and speak whenever we met. Bye, bye.’

Speakers and listeners strolled away, and mixed with other groups. Scrooge knew the men, and looked towards the Spirit for an explanation.

The Phantom glided on into a street. Its finger pointed to two persons meeting. Scrooge listened again, thinking that the explanation might lie here.

`How are you.’ returned the other.

`Well.’ said the first. `Old Scratch has got his own at last, hey.’

`Seasonable for Christmas time. You’re not a skater, I suppose.’

`No. No. Something else to think of. Good morning.’

Not another word. That was their meeting, their conversation, and their parting.

Scrooge was at first inclined to be surprised that the Spirit should attach importance to conversations apparently so trivial; but feeling assured that they must have some hidden purpose, he set himself to consider what it was likely to be. They could scarcely be supposed to have any bearing on the death of Jacob, his old partner, for that was Past, and this Ghost’s province was the Future. Nor could he think of any one immediately connected with himself, to whom he could apply them. But nothing doubting that to whomsoever they applied they had some latent moral for his own improvement, he resolved to treasure up every word he heard, and everything he saw; and especially to observe the shadow of himself when it appeared. For he had an expectation that the conduct of his future self would give him the clue he missed, and would render the solution of these riddles easy.

He looked about in that very place for his own image; but another man stood in his accustomed corner, and though the clock pointed to his usual time of day for being there, he saw no likeness of himself among the multitudes that poured in through the Porch. It gave him little surprise, however; for he had been revolving in his mind a change of life, and thought and hoped he saw his new-born resolutions carried out in this.

Quiet and dark, beside him stood the Phantom, with its outstretched hand. When he roused himself from his thoughtful quest, he fancied from the turn of the hand, and its situation in reference to himself, that the Unseen Eyes were looking at him keenly. It made him shudder, and feel very cold.