START AT THE BEGINNING

They left the busy scene, and went into an obscure part of the town, where Scrooge had never penetrated before, although he recognised its situation, and its bad repute. The ways were foul and narrow; the shops and houses wretched; the people half-naked, drunken, slipshod, ugly. Alleys and archways, like so many cesspools, disgorged their offences of smell, and dirt, and life, upon the straggling streets; and the whole quarter reeked with crime, with filth, and misery.

Far in this den of infamous resort, there was a low-browed, beetling shop, below a pent-house roof, where iron, old rags, bottles, bones, and greasy offal, were bought. Upon the floor within, were piled up heaps of rusty keys, nails, chains, hinges, files, scales, weights, and refuse iron of all kinds. Secrets that few would like to scrutinise were bred and hidden in mountains of unseemly rags, masses of corrupted fat, and sepulchres of bones. Sitting in among the wares he dealt in, by a charcoal stove, made of old bricks, was a grey-haired rascal, nearly seventy years of age; who had screened himself from the cold air without, by a frousy curtaining of miscellaneous tatters, hung upon a line; and smoked his pipe in all the luxury of calm retirement.

Scrooge and the Phantom came into the presence of this man, just as a woman with a heavy bundle slunk into the shop. But she had scarcely entered, when another woman, similarly laden, came in too; and she was closely followed by a man in faded black, who was no less startled by the sight of them, than they had been upon the recognition of each other. After a short period of blank astonishment, in which the old man with the pipe had joined them, they all three burst into a laugh.

`You couldn’t have met in a better place,’ said old Joe, removing his pipe from his mouth. `Come into the parlour. You were made free of it long ago, you know; and the other two an’t strangers. Stop till I shut the door of the shop. Ah. How it skreeks. There an’t such a rusty bit of metal in the place as its own hinges, I believe; and I’m sure there’s no such old bones here, as mine. Ha, ha. We’re all suitable to our calling, we’re well matched. Come into the parlour. Come into the parlour.’

The parlour was the space behind the screen of rags. The old man raked the fire together with an old stair-rod, and having trimmed his smoky lamp (for it was night), with the stem of his pipe, put it in his mouth again.

While he did this, the woman who had already spoken threw her bundle on the floor, and sat down in a flaunting manner on a stool; crossing her elbows on her knees, and looking with a bold defiance at the other two.

`What odds then. What odds, Mrs Dilber.’ said the woman. `Every person has a right to take care of themselves. He always did.’

`That’s true, indeed.’ said the laundress. `No man more so.’

`Why then, don’t stand staring as if you was afraid, woman; who’s the wiser. We’re not going to pick holes in each other’s coats, I suppose.’

`No, indeed.’ said Mrs Dilber and the man together. `We should hope not.’

`Very well, then.’ cried the woman. `That’s enough. Who’s the worse for the loss of a few things like these. Not a dead man, I suppose.’

`If he wanted to keep them after he was dead, a wicked old screw,’ pursued the woman,’ why wasn’t he natural in his lifetime. If he had been, he’d have had somebody to look after him when he was struck with Death, instead of lying gasping out his last there, alone by himself.’

`It’s the truest word that ever was spoke,’ said Mrs Dilber. `It’s a judgment on him.’

`I wish it was a little heavier judgment,’ replied the woman;’ and it should have been, you may depend upon it, if I could have laid my hands on anything else. Open that bundle, old Joe, and let me know the value of it. Speak out plain. I’m not afraid to be the first, nor afraid for them to see it. We know pretty well that we were helping ourselves, before we met here, I believe. It’s no sin. Open the bundle, Joe.’

But the gallantry of her friends would not allow of this; and the man in faded black, mounting the breach first, produced his plunder. It was not extensive. A seal or two, a pencil-case, a pair of sleeve-buttons, and a brooch of no great value, were all. They were severally examined and appraised by old Joe, who chalked the sums he was disposed to give for each, upon the wall, and added them up into a total when he found there was nothing more to come.

`That’s your account,’ said Joe,’ and I wouldn’t give another sixpence, if I was to be boiled for not doing it. Who’s next.’

Mrs Dilber was next. Sheets and towels, a little wearing apparel, two old-fashioned silver teaspoons, a pair of sugar-tongs, and a few boots. Her account was stated on the wall in the same manner.

`I always give too much to ladies. It’s a weakness of mine, and that’s the way I ruin myself,’ said old Joe. `That’s your account. If you asked me for another penny, and made it an open question, I’d repent of being so liberal and knock off half-a-crown.’

`And now undo my bundle, Joe,’ said the first woman.

Joe went down on his knees for the greater convenience of opening it, and having unfastened a great many knots, dragged out a large and heavy roll of some dark stuff.

`What do you call this.’ said Joe. `Bed-curtains.’

`Ah.’ returned the woman, laughing and leaning forward on her crossed arms. `Bed-curtains.’

`You don’t mean to say you took them down, rings and all, with him lying there.’ said Joe.

`You were born to make your fortune,’ said Joe,’ and you’ll certainly do it.’

`I certainly shan’t hold my hand, when I can get anything in it by reaching it out, for the sake of such a man as he was, I promise you, Joe,’ returned the woman coolly. `Don’t drop that oil upon the blankets, now.’ 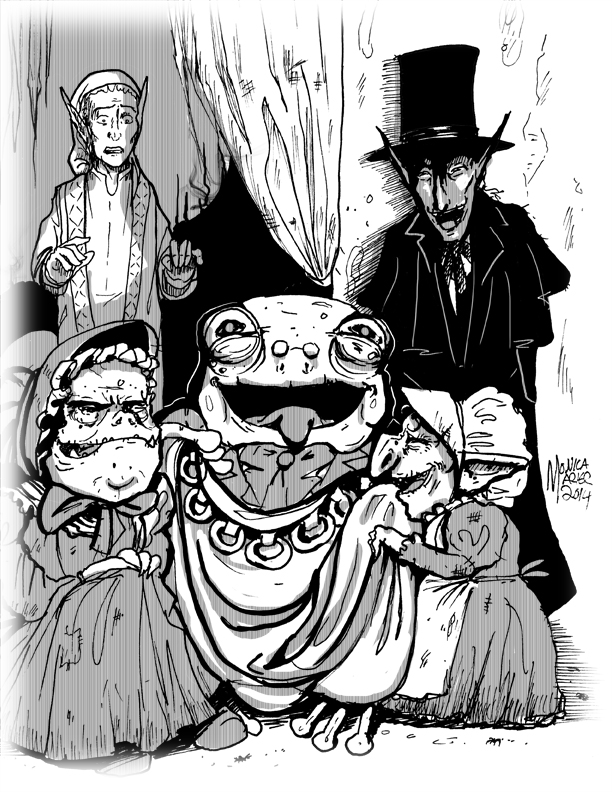 `You don’t mean to say you took them down, rings and all, with him lying there.’ said Joe.

`Whose else’s do you think.’ replied the woman. `He isn’t likely to take cold without them, I dare say.’

`I hope he didn’t die of any thing catching. Eh.’ said old Joe, stopping in his work, and looking up.

`Don’t you be afraid of that,’ returned the woman. `I an’t so fond of his company that I’d loiter about him for such things, if he did. Ah. you may look through that shirt till your eyes ache; but you won’t find a hole in it, nor a threadbare place. It’s the best he had, and a fine one too. They’d have wasted it, if it hadn’t been for me.’

`What do you call wasting of it.’ asked old Joe.

`Putting it on him to be buried in, to be sure,’ replied the woman with a laugh. `Somebody was fool enough to do it, but I took it off again. If calico an’t good enough for such a purpose, it isn’t good enough for anything. It’s quite as becoming to the body. He can’t look uglier than he did in that one.’

Scrooge listened to this dialogue in horror. As they sat grouped about their spoil, in the scanty light afforded by the old man’s lamp, he viewed them with a detestation and disgust, which could hardly have been greater, though the demons, marketing the corpse itself.

`Ha, ha.’ laughed the same woman, when old Joe, producing a flannel bag with money in it, told out their several gains upon the ground. `This is the end of it, you see. He frightened every one away from him when he was alive, to profit us when he was dead. Ha, ha, ha.’